In Which Hair did Clinic Wayne Rooney Have This Procedure?

The 28-year-old striker, who became uncomfortable with the appearance of his hair, had this procedure in 2011. He had this procedure done in the hair transplantation center in London, the capital of the U.K. This process was completed within an average of 9 hours. He paid 7500 pounds for the hair transplantation. The player, whose self-confidence is extremely high, did not feel the need to hide the fact that he had had this procedure. He even used expressions such as ‘I am happy with the result, I am glad I had it’ on his social networking account. The procedure focused particularly on correcting the thinning in the frontal area. When we looked at the donor area of the player, we saw that it was very good as well. The fact that the donor area was robust also contributed to the good results. Underlining that there was some swelling for a few days after the procedure, the famous striker also sent a message that those who intend to have a hair transplantation can go ahead without hesitation.

When did the famous star have this procedure and how many grafts were transplanted?

He had this hair transplantation in 2011. However, the famous striker had two procedures. In other words some more hair transplantation was carried out with the second procedure. How many grafts were made has not been clearly explained, but we can make an educated on the average number according to his appearance. In the first procedure, around 2500 grafts were transplanted, subsequently another 1000 grafts on average were added. It is estimated that a total of 3500 grafts in total was performed with the procedure.

Let’s make a brief evaluation. Evaluation is subjective, meaning thoughts can vary from person to person. What looks good to us might not appear so for you. It is obvious that a meticulous job has been done on the player’s hair. Naturalness has been prioritized and a natural appearance has been achieved. It seems like it could have used a little more thickness, which is also related to the hair structure of the individual. A lot of effort and a good deal of money has been spent in getting a good result. Especially the frontal areas were supplemented. Let us emphasize that it is overall a positive procedure. 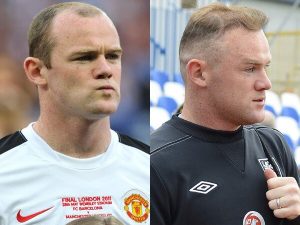 Before and After photographs

Many people want to compare before and after pictures to see the difference clearly. We wanted to show you this first in the photographs and those below. Depending on the point of view, different interpretations are made from person to person. However, according to many people, it has been stated that Rooney looks younger compared to the past and that the thickness of his hair has increased significantly.

Does Rooney Use Toppik products In His Hair?

This subject is asked frequently. It is known that many football players have had hair transplantation, and they use toppik to create a full appearance. Rooney also uses toppik in his hair. We have seen this many times. Although his hair looks thicker than before, he uses the product a little for a more fuller look. The British player applies a spray product style lightly on his hair. Let’s express this detail so that it is not misunderstood. You can also have a hair transplantation and achieve the appearance of thick hair with toppik.